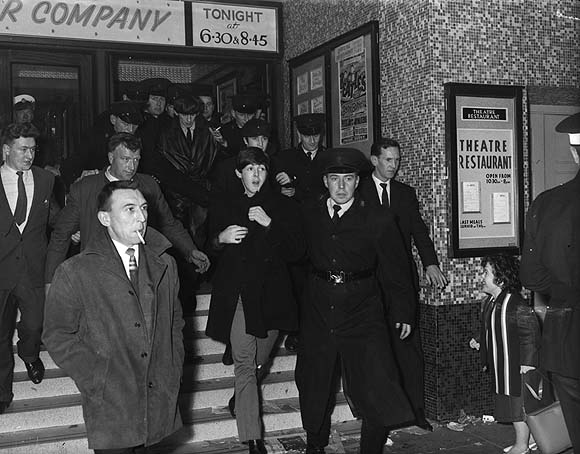 Try to find the date or year when this image was made.
Thanks for contributing!
The Beatles emerging from the Ritz Cinema, Fisherwick Place, Belfast following their concert. Can't spot Ringo Starr, so perhaps he was still inside. They had played the Adelphi Cinema in Dublin the day before.

The Irish Times, Friday, 8 November 1963, reported this brief political exchange in Belfast the day before the concert, under the headline Should Beatles be shaved or shot?

"The Beatles got short shrift from the Minister of Home Affairs, Mr. William Craig, in the Northern Ireland Commons yesterday. He was asked by Mr. Patrick Gormley (Nat.), whether he had considered mobilisation of sections of the B Specials for the visit of the group to Belfast. He replied curtly: "No, Sir."
Mr. Gormley then asked the Minister if he was aware that the visit was an occasion for non-squares and in view of the fact that there was such a high proportion of non-squares in the B Specials, was he not missing a "golden opportunity."
Mr. Harry Diamond (Rep. Lab.), said the kindly people of Belfast would prefer shaving them to shooting them. ... Mr. Edward Richardson (Nat.), asked would the Minister not consider an all-Ireland tax on Beatle hair cuts. There was no reply."