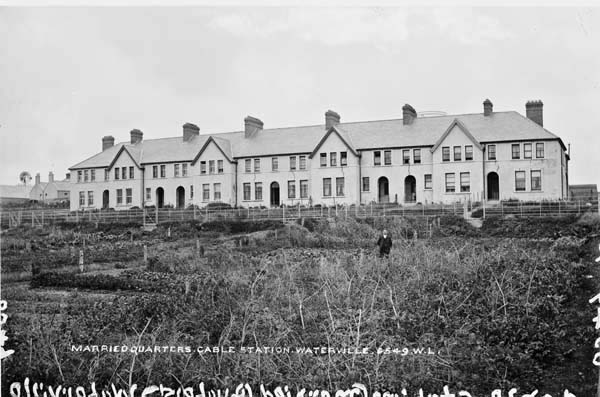 Try to find the date or year when this image was made.
Thanks for contributing!
These were, as it shows on the original glass negative, "Married Quarters.

Myrtle26 has very interesting historical and local background information on these buildings:
"Note how William Lawrence titled the picture 'Married Quarters.' The station was one of three in a small area that controlled all communication with Great Britain and America and in troubled times it fared well, as all sides respected its contribution to the economy. Nevertheless, it came under hostile control and wasn't always considered a safe 'married quarters.' The General Ward was dispatched to evacuate all women and children until peace was restored. [this unsafe time was during the Irish Civil War] 1922, after Erskine Childers had censored or authorised the dispatches passing through. The exterior of the building is the same today as it was then and all houses within it are occupied. They were offered to resident employees around the early sixties for £500.00 each and some thought they were too dear!! They have long gardens reaching to the road so far in front towards the sea that the entire garden lengths aren't shown in this picture. Lawrence possibly set up his camera on the road wall and note the man, almost lost in the garden, looking down towards the camera."