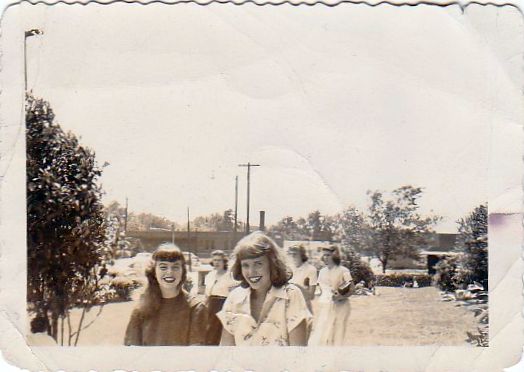 Try to find the date or year when this image was made.
Thanks for contributing!
Snapshot of two high school girls returning to school at Frankfort Community High School in West Frankfort, Illinois, for an unidentified practice [believed to be theater or music performance] after the two went swimming nearby around 1948 or 1949. Pictured is Pat Cowsert (right, foreground) and an unidentified friend (left) of U.S. Marine Lindel D. Dunlop of Zeigler, Illinois. The friend sent him this photograph while Dunlap was serving in the Marine Corps. Caption on back of photograph reads: “At school to practice after we went swimming. We had on jeans but you can’t see them. The other girl is Pat Cowsert if you don’t know” [circa 1948-1949].