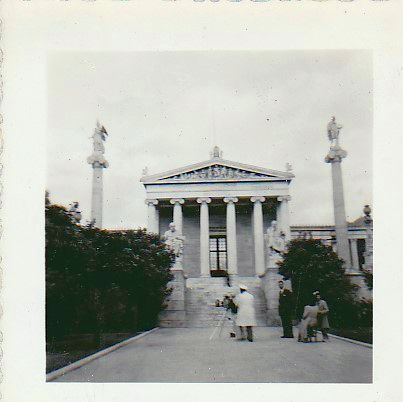 Try to find the date or year when this image was made.
Thanks for contributing!
Snapshot of an unidentified photographer setting up a camera to shoot a family outside of a large ancient ruin with two standing columns with statues on top, somewhere in Athens, Greece, in late 1949. Photograph taken by U.S. Marine Edwin A. Metcalfe of Falconer, NY, who was serving with the 2nd Marine Division from Camp Lejeune, NC, aboard the USS Leyte (CV-32), a Navy Essex-class aircraft carrier, during the carrier’s Mediterranean Sea cruise between September 1949 and January 1950. The ship at stopped for shore leave when this photograph was taken during a tour of Athens (1949).