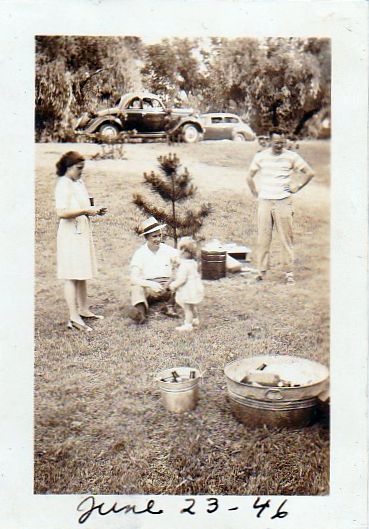 Try to find the date or year when this image was made.
Thanks for contributing!
Snapshot of a toddler walking up to a man sitting on the ground, as a man named Hank and a woman look on, outside during a Sunday outing in a park with family and friends of couple Delbert L. and Leona J. Tenney on June 23, 1946, in Saginaw, Michigan. The Tenneys were attending the outing, after having moved a couple of months earlier back home following Delbert’s U.S. Marine Corps from Camp Lejeune, NC. Tubs of ice with beverages are seen on the ground in the foreground (June 23, 1946).