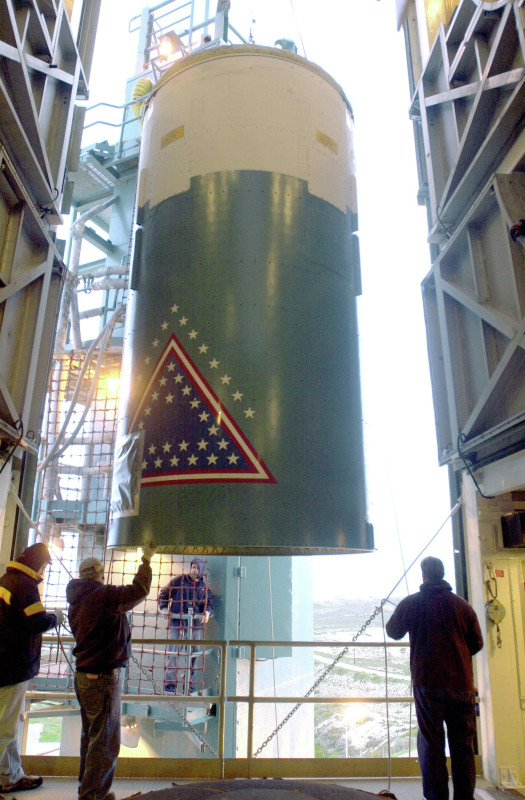 Try to find the date or year when this image was made.
Thanks for contributing!
VANDENBERG AIR FORCE BASE, CALIF. At an upper level of the launch service tower on Space Launch Complex 2 at Vandenberg Air Force Base in California, workers help guide the interstage of a Boeing Delta 2 rocket inside. It will be mated with the first stage in the launch service tower for launch of the National Oceanic and Atmospheric Administration (NOAA-N) spacecraft. The NOAA-N satellite will be placed into a polar orbit aboard a Boeing Delta 2 rocket. The spacecraft will continue to provide a polar- orbiting platform to support (1) environmental monitoring instruments for imaging and measuring the Earth's atmosphere, its surface, and cloud cover, including Earth radiation, atmospheric ozone, aerosol distribution, sea surface temperature, and vertical temperature and water profiles in the troposphere and stratosphere; (2) measurement of proton and electron flux at orbit altitude; (3) data collection from remote platforms; and (4) the Search and Rescue Satellite-Aided Tracking (SARSAT) system. Additionally, NOAA-N is the fourth in the series of support dedicated microwave instruments for the generation of temperature, moisture, surface, and hydrological products in cloudy regions where visible and infrared (IR) instruments have decreased capability. Launch is currently scheduled for no earlier than May 11, 2005. Image from NASA, originally appeared on this site: science.ksc.nasa.gov/gallery/photos/ Reposted by San Diego Air and Space Museum