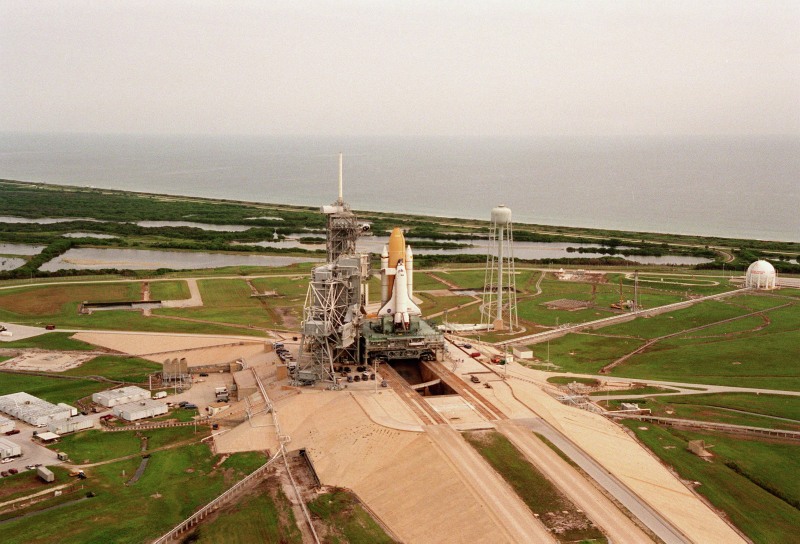 Try to find the date or year when this image was made.
Thanks for contributing!
The STS-95 Space Shuttle Discovery sits on the Mobile Launch Platform, still atop the crawler transporter, at Launch Pad 39B. To its left is the Fixed Service Structure that provides access to the orbiter and the Rotating Service Structure. To its right is the elevated water tank, with a capacity of 300,000 gallons. Part of the sound suppression water system, the tank stands 290 feet high on the northeast side of the pad. Water from the tank is released just before ignition of the orbiter's three main engines and twin solid rocket boosters. The entire system reduces the acoustical levels within the orbiter's payload bay to an acceptable 142 decibels. Beyond the orbiter is seen the Atlantic Ocean. While at the launch pad, the orbiter, external tank and solid rocket boosters will undergo final preparations for the launch, scheduled to lift off Oct. 29. The mission includes research payloads such as the Spartan solar-observing deployable spacecraft, the Hubble Space Telescope Orbital Systems Test Platform, the International Extreme Ultraviolet Hitchhiker, as well as the SPACEHAB single module with experiments on space flight and the aging process. Image from NASA, originally appeared on this site: science.ksc.nasa.gov/gallery/photos/ Reposted by San Diego Air and Space Museum