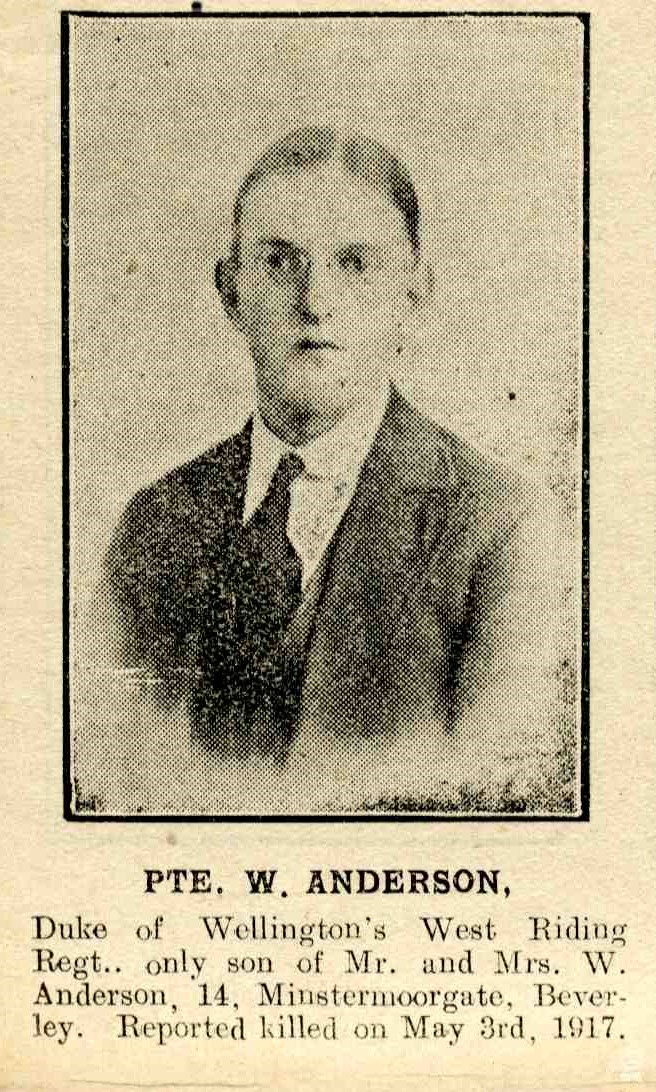 Try to find the date or year when this image was made.
Thanks for contributing!
Walter Anderson was born in Beverley on 6 February 1898, the youngest son and sixth of the seven children of William and Mary Jane Anderson.
It is not clear when Walter Anderson left employment as an apprentice draper and signed up to do his bit in the war, but he started by enlisting in the East Yorkshire Regiment, though by 1917 he was Private Walter Anderson of the 2/5th Battalion of the Duke of Wellington's West Riding Regiment.
On 3 May 1917 the Battalion moved forward to attack enemy lines, having reached their objective they were turned out of the enemy trenches in a counter attack and were held, pinned down by shell, rifle and machine gun fire, in front of the enemy front line trenches and forced to wait until dark to return to their own lines. Losses were heavy and the wounded 'dribbled in' all the next day. Walter Anderson was one of those reported missing.
Walter was awarded the Victory Medal and the British War Medal. His name appears on the Arras Memorial and the Beverley Minster War Memorial.

For any enquiries about this image please quote the archive reference 'WL'.
(Copyright) We're happy for you to share this digital image within the spirit of Creative Commons. Please cite 'East Riding Archives ' when reusing.
Certain restrictions on high quality reproductions and commercial use of the original physical version apply. If unsure please email [email protected]
(Why not try searching our East Riding of Yorkshire Map for more historic images? www.flickr.com/photos/erarchives/map )