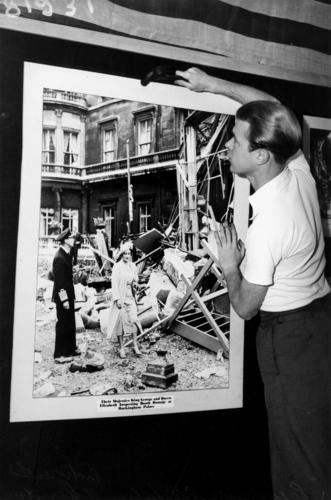 Try to find the date or year when this image was made.
Thanks for contributing!
Creator: Unidentified. Queensland Newspapers Pty Ltd.

Description: Preparations for an exhibition of the seventy photographs showing war damage, sent to the Courier Mail by the London Press Club and the British Ministry of Information. The exhibition was held in Brisbane City Hall basement from Monday 3 November 1941 and was officially opened by the Vice Mayor Alderman Tait. Proceeds from the exhibition were to aid funds for the Toc H Services Club. (Description supplied with photograph)

TOC H was established during World War 1. It started in a house in a Belgian town named Poperinge, a few miles behind the front-line trenches. The house was called Talbot House (whose initials, in army telephone jargon, give TOC H its distinctive name). In this house a young Army chaplain, the Rev. 'Tubby' Clayton, set up a rest centre for soldiers.

From the start, it was open to all ranks, which was very unusual. Many who visited gained a deeper understanding of other people, and of their own Faith. After the War the men who survived returned to civilian life. They decided to try to recreate the Talbot House experience in peacetime. They started creating opportunities for other people to have that same experience, whether the divisions were of rank, class or any other. To begin with, they set up residential houses like Talbot House. Later, they started forming local branches, which met weekly. Very soon women were fully involved too. (Information taken from: Internet Toc H database, 2005, retrieved 17 March 2005, from www.toch.org.uk/history.htm)

View the original image at the State Library of Queensland: hdl.handle.net/10462/deriv/92577.