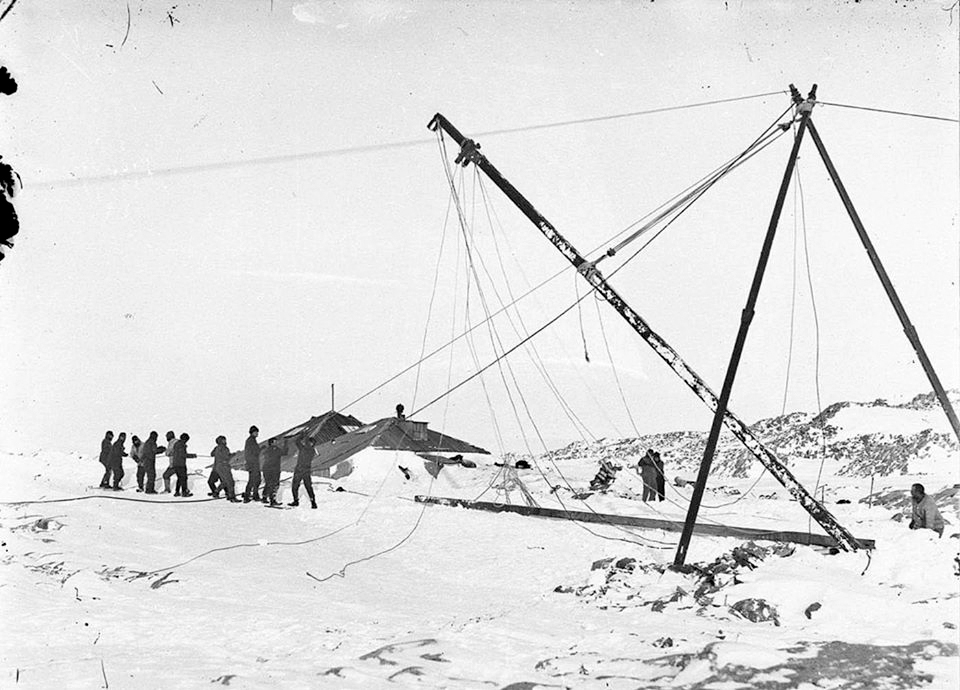 Try to find the date or year when this image was made.
Thanks for contributing!
Raising a wireless mast at Cape Denison, April 1912, Frank Hurley, from whole plate glass negative, Australian Antarctic Expedition, ON 144/W184, State Library of New South Wales Home and Away - 36750, archival.sl.nsw.gov.au/Details/archive/110038060

On the evening of 19 January 1912, after several days spent unloading stores, the ship the Aurora left Douglas Mawson and 17 other men at Cape Denison in Antarctica. It would be a year before she would return to pick them up.

Their first job was to construct a hut with an enclosed verandah to protect them from the elements. But by the end of January, with the hut was mostly complete, they began work on setting up their scientific instruments and installing a mast for the first trans-Antarctic telegraph system.

Mawson's plan was to set up a wireless station at Macquarie Island to act as a transmission station to send the signals sent by the party at Cape Denison on to Australia. This was because only long-wave telegraph transmission was available and the generators at Cape Denison, would not have enough power enough to transmit messages all the way back to Australia.

By April, the party finished the construction of the wireless masts, but the choice of the site proved to be of immense significance. Although quiet weather had prevailed when they landed, Cape Denison turned out to be one of the windiest places on earth. Some of these winds were recorded as gusting to over 241 kilometres per hour. Mawson noted these continuous winds caused a, remarkable degree of abrasion of the exposed surface of wooden objects and the polishing of metal objects by the snow blasts. These incessant winds kept them indoors for much of their stay and blew down the masts making wireless transmission impossible.

It was not until 15 February 1913, that the party finally made their first contact with Macquarie Island and after this were able to submit daily weather summaries to Australia.