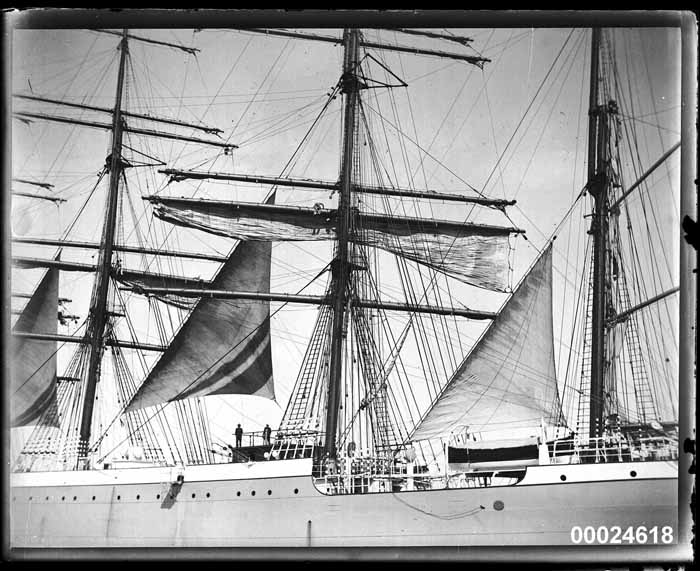 Try to find the date or year when this image was made.
Thanks for contributing!
The four-masted steel barque, MAGDALENE VINNEN, was built in 1921 in Kiel, Germany for F A Vinnen and Company in Bremen. On 27 February 1933, under the command of Captain Lorenz Peters, MAGDALENE VINNEN sailed into Sydney Harbour. The masts were too tall to allow the vessel to pass under the Harbour Bridge to be berthed in Pyrmont, so it was moved to Number 2 wharf in Woolloomooloo. The barque was loaded with almost 16,000 bales of wool, the fourth largest shipment to have left Sydney, before it sailed the record-breaking 82-day voyage for Falmouth, England.

The barque visited Australia again in 1935, with its cargo being wheat, lifted from Port Broughton in South Australia. The following year, the vessel was sold to Norddeutscher Lloyd, Bremen, renamed KOMMODORE JOHNSEN and used as a cargo carrier and sail-training ship. In 1945, the ship was awarded to the Soviet Union as war compensation and renamed SEDOV. When it was first built, it was the largest auxiliary barque in the world. To this day, it is still in operation and in 2011, it retained its ranking as the largest tall ship in the world.

This photo is part of the Australian National Maritime Museum’s Samuel J. Hood Studio collection. Sam Hood (1872-1953) was a Sydney photographer with a passion for ships. His career spanned the romantic age of sail and two world wars. The photos in the collection were taken mainly in Sydney and Newcastle during the first half of the 20th century.