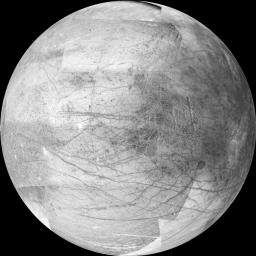 Try to find the date or year when this image was made.
Thanks for contributing!
This 12-frame mosaic provides the highest resolution view ever obtained of the side of Jupiter's moon Europa that faces the giant planet. It was obtained by the camera onboard NASA's Galileo spacecraft on November 25, 1999, during the spacecraft's 25th orbit of Jupiter.