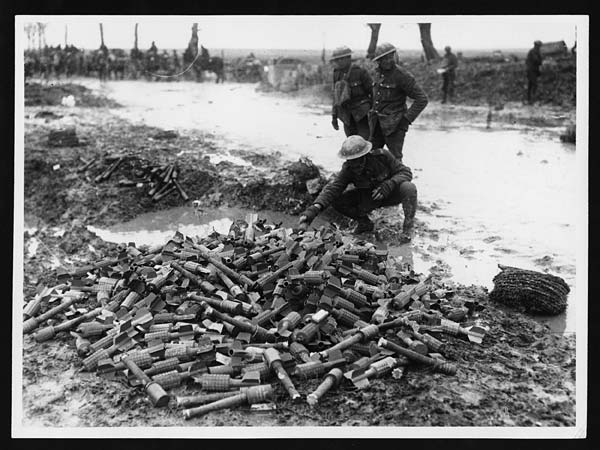 Try to find the date or year when this image was made.
Thanks for contributing!
Captured German weaponry, France. In the background the muddy field is visible along with horse-drawn guns and tree stumps. Ariel torpedoes or what the soldier calls 'pine apple The picture is dominated by a huge puddle or pond. At the front of the picture is a pile of grenades which a soldier is pointing to. It is believed that Ernest Brooks took this photograph.

The derogatory term for a German, 'Boche', originates from the French slang alboche, which was two words allemand (German) and caboche (pate, head) put together. Scenes such as this were commonly used as propaganda, intended to reaffirm resolve against the enemy.

[Original reads: 'OFFICIAL PHOTOGRAPHS TAKEN ON THE BRITISH WESTERN FRONT IN FRANCE. A great proof that the Boche did not expect to be pushed back is that there are several heaps of ammunition and bombs of all descriptions lying about. Ariel torpedoes or what the soldier calls 'pine apples.']