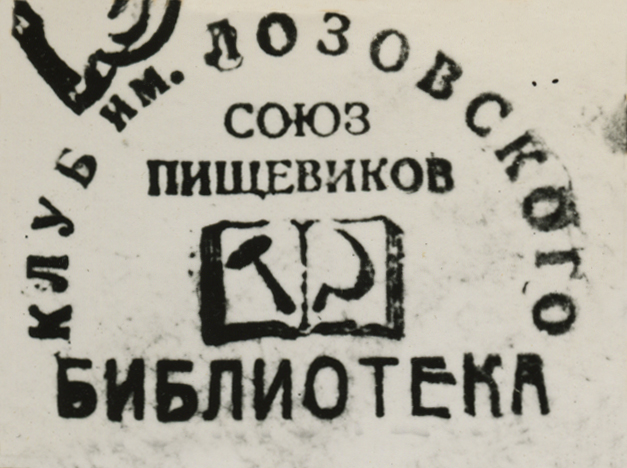 Try to find the date or year when this image was made.
Thanks for contributing!
The Lozovsky referred to in this stamp is most likely Solomon Lozovsky, a prominent Bolshevik and, during the times he was expelled from the Bolshevik Party (in 1914 and 1918), a Mezhraionets (a Russian Social Democratic Party faction straddling the ideological territory between the Bolsheviks and Mensheviks). He was a long-time revolutionary and a high official in various capacities in the Soviet Union. His Soviet political credentials were serious – at various times Presidium member of the All-Union Central Council of Soviet Trade Unions, Supreme Soviet member, Deputy People's Commissar for foreign affairs (answering to Molotov), and head of the Soviet Information Bureau (Sovinformburo). He was also the chair of the department of International Relations at the Higher Party School and General Secretary of the Red International Labour Union (Profintern). A Union club being named in Solomon Lozovsky’s honor is in line with his extensive involvement with labor unions throughout much of his career. This stamp is a testament to the existence of libraries in Union social institutions in the Soviet Union. He was born in Ukraine to Jewish parents and was a member of the Jewish Anti-Fascist Committee. He was murdered together with thirteen other members of the Jewish Anti-Fascist Committee in 1952 during Stalin’s anti-Semitic campaigns of the late 1940s and early 1950s. This event came to be known as the Night of the Murdered Poets, as five of the thirteen victims were Yiddish writers.

The Center for Jewish History would like to acknowledge the following: The American Jewish Historical Society, who graciously allowed the use of their archival materials and digital content; Mitch Fraas, Acting Director of the Digital Humanities Forum at the University of Pennsylvania Libraries' Special Collections Center, for his data and technical assistance in this project; David Rosenberg, Senior Manager for Communications, and Melanie Meyers, Senior Reference Services Librarian for Special Collections, for managing and creating the digital map; as well as Reference Services Librarians Zachary Loeb and Ilya Slavutskiy for their work on translating and mapping.