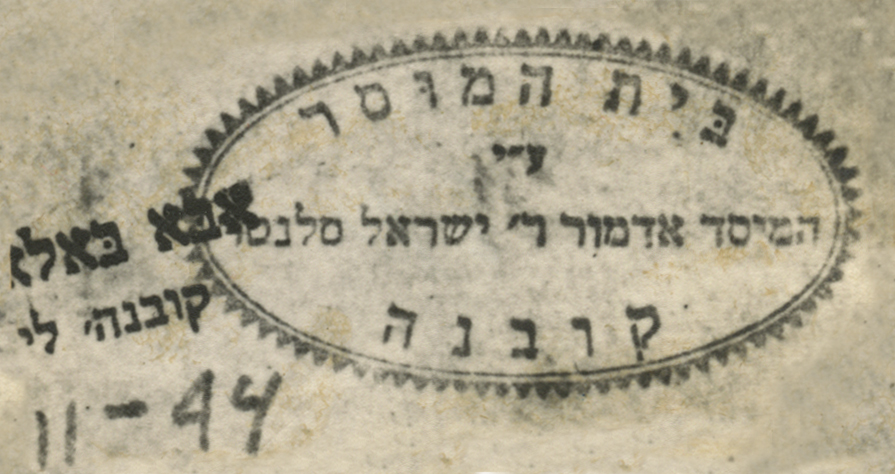 Try to find the date or year when this image was made.
Thanks for contributing!
House of Ethics. The Foundation, Our Master, Our Teacher, and Our Rebbe (admur) Rabbi Yisrael Salanter. Kovno

Born in Lithuania in 1810, Rabbi Yisra’el ben Ze’ev Volf Salanter (also known as Lipkin) was a prominent Rabbi and is the founder of the first Musar society. As a young man Salanter was sent to study Torah with Rabbi Tsevi Hirsh Broyda, during his studies Salanter came into contact with Yosef Zundel through whom Salanter became interested in questions regarding moralistic and ethical teachings. For Salanter it was not enough for Jews to observe the commandments and be committed to the study of Torah, they also needed to devote themselves to ethical improvement. This led Salanter to found a “Musar house” in Vilna where ethical texts were studied and where Salanter delivered lectures. Throughout his life Salanter moved around establishing “Musar houses” in many cities in Eastern and Western Europe. The teachings of the Musar movement were somewhat controversial in Salanter’s lifetime and the standards for moral improvement were highly demanding of adherents. Though Rabbi Salanter died in 1883, the Musar movement outlived him, with the movement expanding in the nineteenth century as Salanter’s disciples became involved in yeshivas. This bookstamp came from the Musar House (the “house of ethics”) in Kovno.