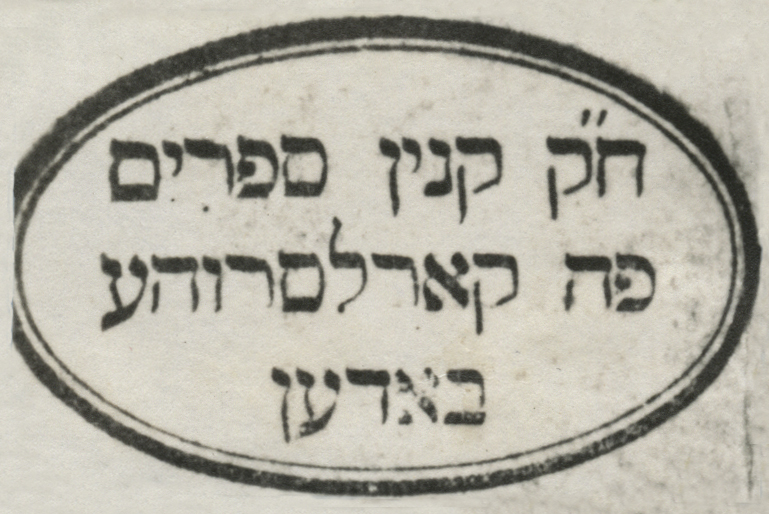 Try to find the date or year when this image was made.
Thanks for contributing!
Karlsruhe is the capital city of the grand duchy of Baden in Germany, a city with a lengthy Jewish history dating back to the early 1700s when Jews were attracted to the city by pledges of non-discrimination by the city’s leaders – though it was not until 1862 that the city’s Jews were granted full emancipation. The city was home to a highly respected publishing industry which printed numerous important Hebrew books throughout the 1700s and 1800s – and was also the site of the central council of Baden Jewry. Given the city’s reputation as a place of religious knowledge it is no surprise that a book shop such as the one identified by its bookstamp as “Chatzi Kaddish Intellectual Books” should be found in Karlsruhe. Instances of anti-Semitic rioting took place in Karlsruhe at several points throughout the 1800s, but the Jewish community remained resilient. Yet the storied history of the Jews of Karlsruhe came to a destructive point in the fall of 1938 – Polish Jews were deported in October and on Kristallnacht the synagogues in Karlsruhe were destroyed. Waves of deportations forced the Jews of Karlsuhe to leave the city fleeing for their lives or sent them to concentration camps. The Jewish population of Karlsruhe had never been particularly large (there were fewer than 3,500 Jews in Karlsruhe in 1933), but more than 1,000 members of the community were murdered in the years of Nazi rule. A new synagogue was constructed in Karlsruhe in 1969.