Aerial view of the River Wear 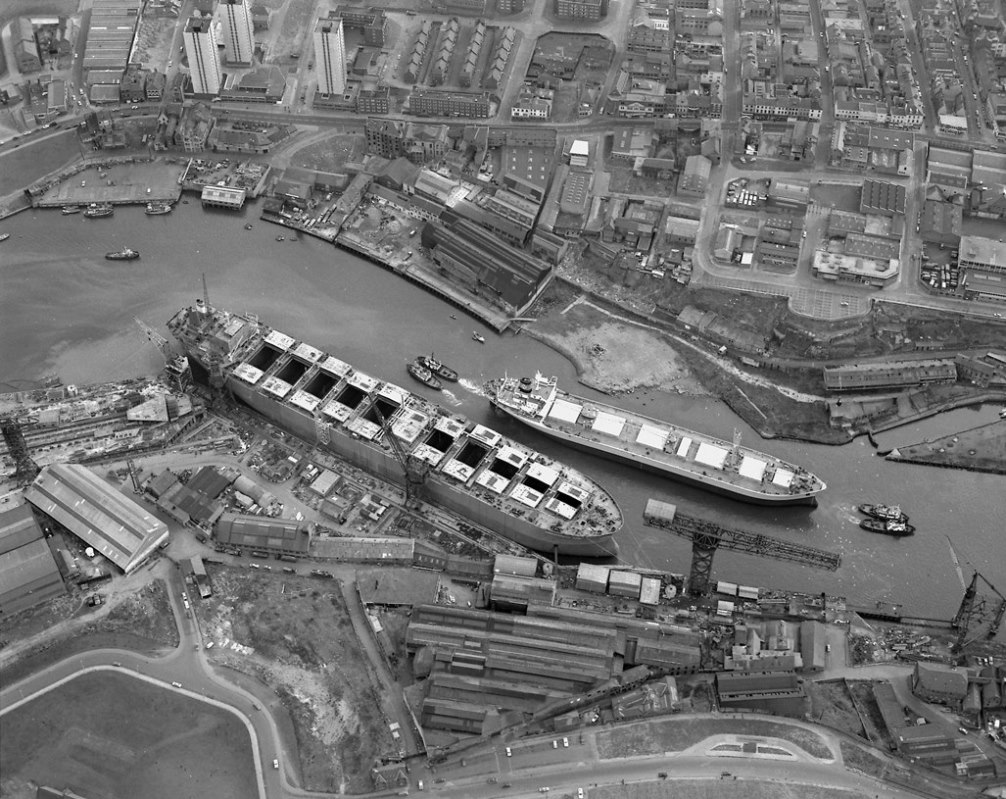 Try to find the date or year when this image was made.
Thanks for contributing!
Aerial view of ‘Naess Crusader’ at Manor Quay, Sunderland as a ship is towed past, 4 March 1973 (TWAM ref. DT.TUR/2/61267B). The image also shows her sister ship 'Nordic Chieftain' under construction at the North Sands shipyard.

The vessel under tow has been identified as 'Fidias' (launched at the Deptford yard, Sunderland on 18 December 1972) by Anthony Renton of Sunderland Tugs and Shipbuilding in pictures.

These photographs were taken by the Newcastle-based firm Turners (Photography) Ltd. They celebrate the construction of the OBO (oil/bulk/ore) carrier ‘Naess Crusader’, covering the early stages in January 1972 through her launch on 21 December 1972 to her completion and sea trials in July 1973.

‘Naess Crusader’ and her sister ship ‘Nordic Chieftain’ were built by Sunderland Shipbuilders Ltd at the firm’s North Sands Shipyard for Anglo Eastern Bulkships Ltd. They were the largest ships ever built on the River Wear.

The memory of ‘Naess Crusader’ is integral to the Sunderland Keel Line, a new public artwork, opened in 2015, which celebrates the City’s shipbuilding heritage. The Keel Line is 291.7 metres long and that distance was chosen because it represents the full length of ‘Naess Crusader’. This album is a reminder of Sunderland’s proud industrial heritage and a tribute to the skill and dedication of her shipyard workers.