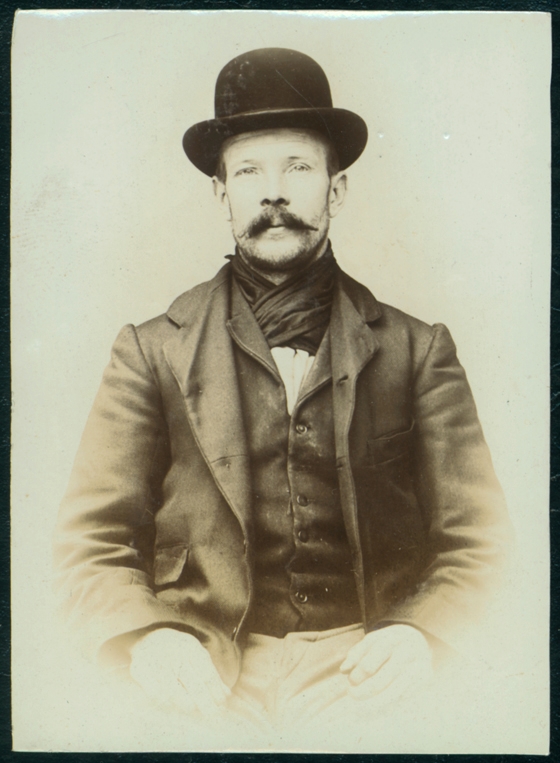 Try to find the date or year when this image was made.
Thanks for contributing!
Name: George Webster
Arrested for: not given
Arrested at: North Shields Police Station
Arrested on: 25 September 1905
Tyne and Wear Archives ref: DX1388-1-77-George Webster

EMBEZZLEMENT AT NORTH SHIELDS. A CARTMAN SENT TO PRISON.

Mr Holliday said the accused was charged with having embezzled three sums of money from Mr Wilkinson, with whom he had been employed five weeks. He was a cartman and it was his duty daily to take out rolley loads of bottled stuff &c., some of which had been ordered, the remainder being for sale. He had to collect moneys and render an account to Mr Wilkinson upon his return from each journey

On Easter Monday, the 24th April, he was sent out with a load of 80 doz. Smila and pop, three boxes of cigarettes and other articles. He returned on the afternoon, at least his horse was stabled in the afternoon, and as the accused did not put in an appearance Mr Wilkinson sent round to his house in order to ascertain the reason. His wife informed the messenger that that her husband had disappeared and that she did not know where he was. She handed over his receipt book, which contained entries shewing that the accused had received payment of certain accounts and had not handed them over to his employer. The prisoner had absconded and was away four and a half months. He returned to his own home where he was arrested on the 17th inst. Formal evidence was given as to the payment of certain accounts to the accused, who had handed the money over.

Det. Scougal said he apprehended the accused, who was hiding under the stairs of his house. Prisoner pleaded guilty and expressed his sorrow, offering to refund the money if he was given a chance. Mr Wilkinson did not press the charge but the Bench could not overlook the case and committed prisoner for 14 days with hard labour.”