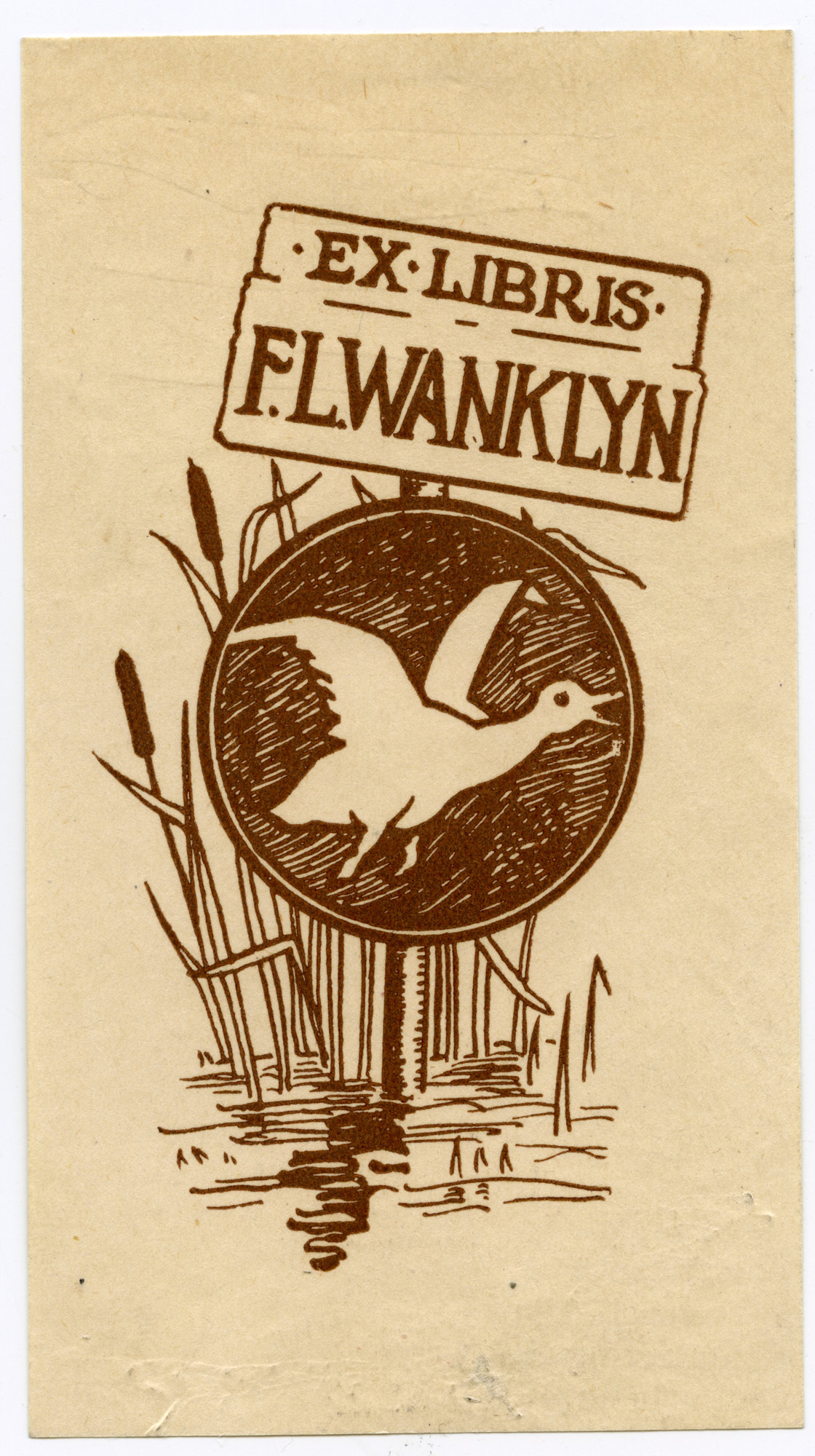 Try to find the date or year when this image was made.
Thanks for contributing!
Reminder: No known copyright restrictions. Please credit UBC Library as the image source. For more information see digitalcollections.library.ubc.ca/cdm/about.

Notes: In brown ink on white paper, a flying duck within a darkened circle is at the centre of the bookplate. It appears to be affixed to a post, on top of which there is a sign that reads 'Ex Libris F.L. Wanklyn.' The post is standing in a marsh. ; Bookplate Type : Pictorial ; Bookplate Function : OwnershipFrederic Lumb Wanklyn was a Montrealbusiness executive, born in Buenos Aires to British parents on February 25, 1860. At the age of eleven after his father's death, Wanklyn returned to England with the rest of his family. He went on to attend Marlborough College and then studied engineering in Manchester, England. His first notable position as an engineer was in the Lombardy region of Italy, where he became a resident engineer of the Tramways and General Works Lines. He was then appointed general manager and engineer of the Lombardy Roads Railway Company. Wanklyn eventually moved to Canada, and from 1897 until 1903 acted as the manager and chief engineer of the street railway in Montreal. From 1903 to 1910, he was the vice-president of the Dominion Coal Company, and continued his work with the company as a director until 1920. He was also at one point the director and then the vice-president of the Dominion Bridge Company, and worked with the company until his death. In 1910, a Board of Commissioners was created for the city of Montreal, and Wanklyn was elected to the Board and served as a member for two years. He is, however, perhaps most known for his ties to the Canadian Pacific Railway, where he worked from March 1912 until January 1925. During this time, he also sat on the Fuel Board and the Board of Governors of both the Royal Victoria Hospital and the Alexandra Hospital. Outside of his career, Wanklyn was a Freemason and fond of the outdoors; he enjoyed shooting, fishing, golfing, and other sports. He collected hand-carved works of art and also liked to travel; although Montrealremained his permanent home, he often spent the winter months after his retirement abroad and in other parts of Canada. Wanklyn was married twice, first to Edith Margaret Angus, from 1887 until her death in 1907. With Edith, he had three sons and a daughter. His second marriage was to Lucy Helen McConnel, who was with him on the cruise where he fell ill and then passed away on August 3, 1930. ; Personal