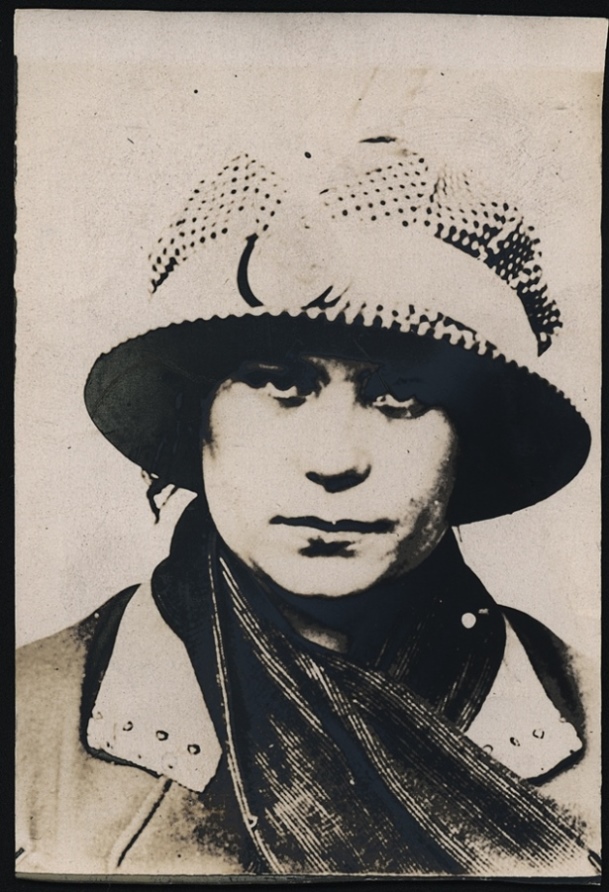 Try to find the date or year when this image was made.
Thanks for contributing!
Name: Jane A. V. Duffy
Arrested for: not given
Arrested at: North Shields Police Station
Arrested on: 9 December 1914
Tyne and Wear Archives ref: DX1388-1-250-Jane A V Duffy

“A YOUNG WOMAN IN TROUBLE.

The prosecutrix said that at 18.15 pm on the 26th ult. she was in Bedford Street, when the accused was brought to her and she asked if witness could give her board and lodgings. She stated that she had just got work at a drapers and would pay her 15s a week for board and lodgings. Witness took her home. Next morning the defendant got up at 9 o’clock, and while witness was cleaning the step the defendant ran out by the back, and witness missed the articles mentioned.

Detective Sweeney of Wallsend said he arrested the accused on another charge on the 28th ult. and found the items mentioned in her possession. Detective-Sergt. Hall deposed to recovering the property from the last witness and receiving the accused into custody after she had been dealt with by the magistrates at Wallsend.

The mother of the girl told the magistrates that her daughter had no reason to steal, having a good home and having been well brought up, but she was rather weak in mind and had given her some trouble. The clerk enquired why the magistrates at Wallsend had bound her over for 12 months under probation. Detective Sweeney said that the mother and the solicitor representing her promised to put her into a home. Mrs Duffy said that Father Turner had promised to look after her and put her into a home for feeble-minded at Carlisle and an arrangement was made that she would go into the Harton Workhouse in the meanwhile. The girl, however, objected to going to the workhouse and wanted to go home. The case was remanded for a day.”

The remanded charge against Jane Agnes Duffy (19), Westcott Terrace, South Shields of stealing a gold brooch, a keeper ring and a blouse, valued in all at £1 12s 6d, the property of Barbara Cunningham, Trevor Terrace, North Shields, came up for hearing this morning.

The case has several times been adjourned in order that a place should be found for the girl in a home. The Bench on one occasion expressed their opinion that they did not think she had been properly looked after at home. This morning, the Bench, after due consideration of the case and circumstances, decided to bind the girl over for twelve months in the mother’s surety of 40s, to be of good behaviour.”