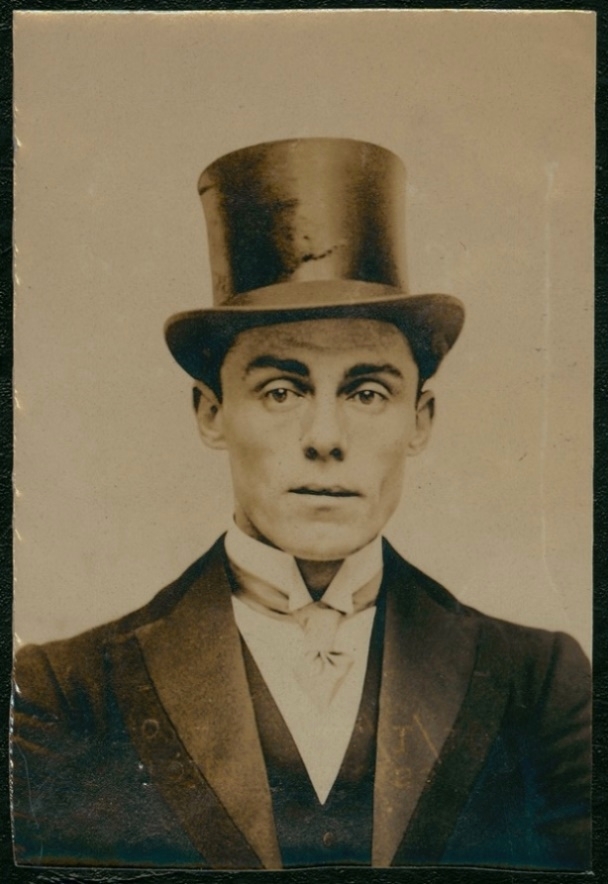 Try to find the date or year when this image was made.
Thanks for contributing!
Name: James G. Chase
Arrested for: not given
Arrested at: North Shields
Arrested on: 22 January 1916
Tyne and Wear Archives ref: DX1388-1-264-James G Chase

At North Shields today, James George Chase (23), a munition worker, residing at Lynn Villa, Billy Mill, was brought up on remand, charged with having unlawfully obtained by false pretences, from Joseph Emery, the sum of £20, with intent to cheat and defraud, between Dec. 13th and Jan. 17th.

Joseph Emery stated in May last he became acquainted with the defendant. During the latter part of that month the defendant told him something about an estate in Australia, valued at £70,000. About the 17th December, witness received a letter, which was supposed to have come from a detective at Scotland Yard, and his wife received a wire for £10 to be sent to the defendant in London, and witness sent it. On the 10th inst. the defendant returned from London and handed witness a sealed envelope. He opened it and found it contained two documents. After reading them, defendant asked is he was satisfied and he said it seemed to be alright. On the 17th inst. the defendant asked for another £10 and witness gave it to him. On the 21st inst. witness communicated with the police and on the 22nd obtained a warrant for the defendant’s arrest.

Det. Radcliffe stated that on the 22nd inst. he arrested the defendant in Saville Street, and brought him to the Central Police Station. He read the warrant over and defendant replied “I can’t say anything until I have seen Mr Emery”. Afterwards he said there was no truth in the statement regarding the fortune. When charged this morning he replied “I admit everything: I know I have done wrong”. Defendant pleaded guilty and had nothing to say.

Mr Emery, recalled, said he had not believed half the defendant’s statements from the first. The defendant had said that a young man had to go with him to Australia as a bodyguard to bring the money back.

The defendant was committed to prison for one month in the second division.”