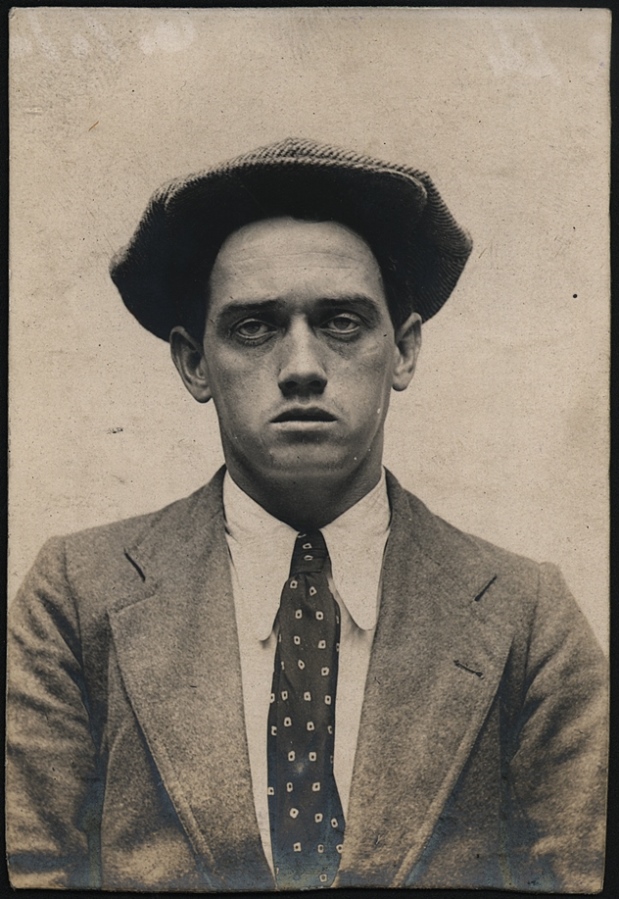 Try to find the date or year when this image was made.
Thanks for contributing!
Name: John W. Hoole alias Thomas McNeish
Arrested for: not given
Arrested at: North Shields Police Station
Arrested on: 6 July 1915
Tyne and Wear Archives ref: DX1388-1-260-John W Hoole AKA Thomas McNeish

“PLATER’S THEFT FROM A WOMAN’S PURSE IN A NORTH SHIELDS FISH SHOP.

John Wm. Hoole (23), plater, was charged on remand at North Shields yesterday with having stolen, on the 5th inst. the sum of 10s 6d, belonging to Mrs Jennie Young.

Prosecutrix, the wife of Joseph Young, residing in Roseberry Avenue, Preston, said about 9pm on the 5th inst. she went into the fish shop at the corner of Borough Road and Gardner Street and sat down on a seat. She had her purse in her hand and it contained at that time 10s 6d in silver, including a half-crown and three two shilling pieces. Shortly afterwards the accused and two soldiers came in and sat down on the same form. Witness got up and left but as soon as she got to the door she remembered she had left her purse lying on the seat. She went back and saw the accused pick her purse up and hand it to a solider to give to her. When she received the purse she found it was open and the money was missing. The soldier sent for a policeman and the accused was taken into custody.

Pte. Gilbert of the 2nd Dragoon Guards, at present attached to the Duke of Wellington’s Regiment. Said he had known accused for about a week prior to the 5th inst. On that night accused joined witness and another soldier in a public house. He said he had no money and he had to borrow 1s from a woman before he could stand the “drinks”. Afterwards he asked them to go to the fish and chip shop. The woman who lost her purse was sitting nearest to the accused. After the woman went out and came back accused picked up the purse and asked witness to give it to the woman. Witness did so and as the woman was moving away accused handed witness a 2s piece, saying “Here’s 2s for you and your mate to get a drink”. Witness asked him where he got the money and accused replied “You never know what money you’ve got”. When the woman complained that the money had been stolen from her purse witness sent for the police so that the matter might be cleared up.

Det. Graham deposed to taking the accused into custody. As he went towards accused he heard a jingle of money and afterwards found two 2s pieces on the floor near where he was sitting. He recovered 5s from the accused in addition and also the 2s from the witness Gilbert.

Accused pleaded not guilty. Asked to account for the 5s which was found upon him, when he told the soldiers that he had no money at all earlier in the night, accused said he had kept quiet about that money because he needed it to get to Southampton. He had, he said, been working at Palmer’s where he earned £4 per week.

The Bench found the case clearly established and a previous conviction being proved against him at the Moot Hall, Newcastle, where he was sent to gaol for six months for the theft of a watch and jewellery, they committed him to prison for one month”.