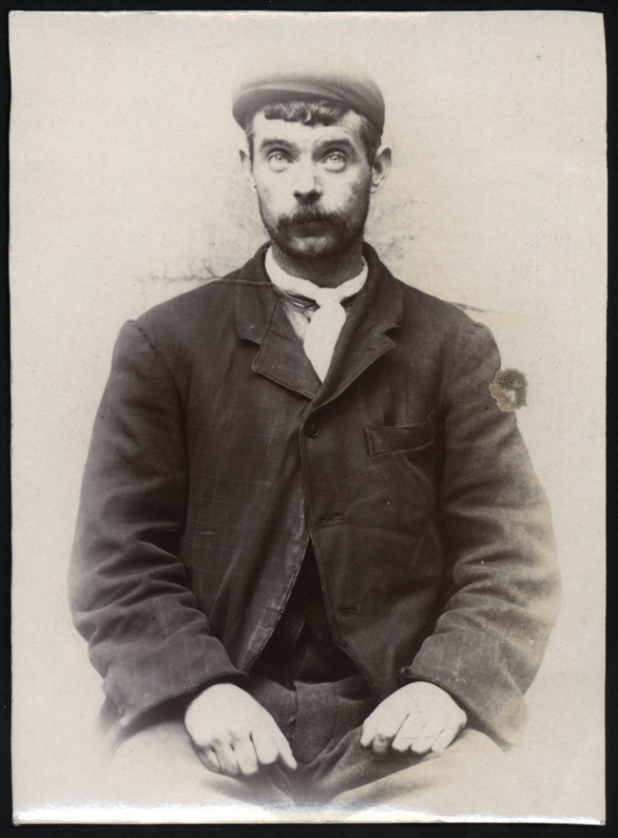 Try to find the date or year when this image was made.
Thanks for contributing!
Name: Thomas Melia
Arrested for: not given
Arrested at: North Shields Police Station
Arrested on: 15 December 1905
Tyne and Wear Archives ref: DX1388-1-81-Thomas Melia

“THEFT FROM THE PERSON AT NORTH SHIELDS.

At North Shields Police Court today, Thomas Melia (29), Causey Bank and John Casey (44), Clive Street, were charged with being concerned together in stealing 8s from a Norwegian seaman named Elens Sjursen on the 13th inst. Prosecutor stated that on the 12th inst. he was paid off from the SS Kingscote at Middlesbro’. He came to North Shields the same day, and on the following day, between 11 and 12pm he was in Clive Street, a little the worse for drink, and he met the two prisoners and asked them where a woman named Hunter lived. They said they would show him and they took him to a house and as he was about to go in Casey struck him in the face, blackening his right eye, and Melia got him by the neck and took his money out of his pocket after which they made off.

Further evidence having been given by two women, who witnessed the assault and robbery, and Detective Sergt. Scougal, who arrested them, the accused were formally charged and pleaded not guilty. Previous convictions were put in against both prisoners and the magistrates sent them to prison for a month”.

As this report indicates it certainly wasn’t Melia’s first brush with the law. The Shields Daily News for 6 February 1905 reports:

At North Shields Police Court today, Thomas Melia (29), Causey Bank, was charged with living upon the proceeds of the prostitution of Bridget Lamb, between Oct 1st and Jan 31st. Evidence having been given, the Chairman (Mr T. Young) said the accused was the most unmitigated, shameless blackguard that had ever been brought before them and he would have to go to prison for 3 months with hard labour”.