Libary of the Kharkhaver Jewish Workers Cooperative Self Education 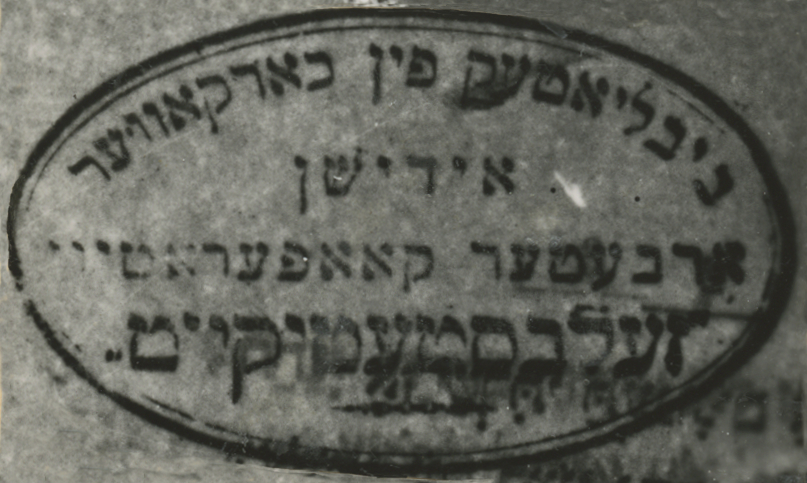 In the years following the end of the First World War and the Russian Revolution the city of Kharkiv – in Ukraine – became home to a large and vibrant Jewish community; indeed, the Jewish population of Kharkiv swelled to well over 100,000 in the years preceding the start of the Second World War. As the capital of the Ukrainian SSR (from 1919 to 1934) Kharkiv was not only a site of important industry but also a hub for culture, education and political activity. For years Kharkiv was a major center for Zionist political organizing, but with the consolidation of control by the Communist party political life was increasingly controlled. Due to its large Jewish population, Kharkiv was home to a thriving Yiddish culture though it largely emphasized secular socialist values as opposed to religious or Zionist ideologies. This book stamp – from the library of the Kharkhaver Jewish Workers’ Cooperate, touting the importance of self-education – is a record of the intersection of the Jewish community with communist politics in the city. During World War II Kharkiv was the site of many fierce battles as control of the city went back and forth between the Nazis and the Soviets. Though many of Kharkiv’s Jews fled before the advance of the Nazi forces, those who remained were forced into ghettoes and massacred. Stamps such as this one bear testament to the once vibrant Jewish community that was decimated during the Second World War.