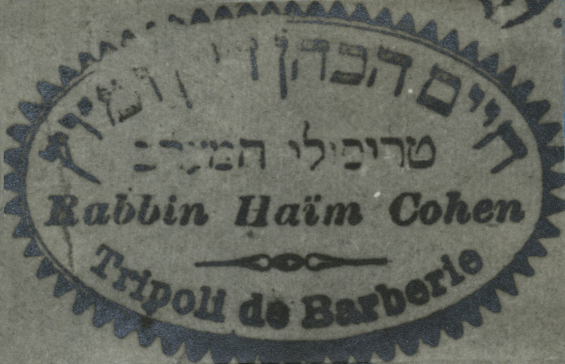 Try to find the date or year when this image was made.
Thanks for contributing!
Rabbi Haim Cohen – Tripoli

The Jewish community of Tripoli dates back to the Phoenician period. While the early centuries of Jewish presence in Tripoli were marred by repression and shifting legal decrees, by the 1930s a stable and prosperous Jewish community existed in Tripoli numbering over 15,000. With the rise of fascism the Jews of Tripoli were initially spared the harshest forms of repression; however with the publication of the racial laws of October 1938 the fate of Tripoli’s Jews took a turn for the tragic. In February 1942 a force from the German army entered Tripoli and began to “Aryanize” Jewish property; on February 7, 1942 Mussolini issued a deportation decree. While the Jewish community of Tripoli was not as large as the communities found in many places in Europe this book stamp demonstrates that the looting of Jewish libraries was not constrained to Europe.